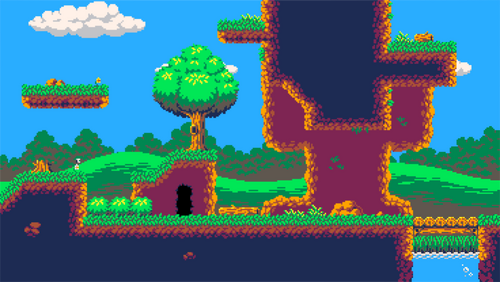 I inform that Grassland environment received his last update! The changes were specially in the terrain and a few more assets. To tell the truth, I was playing with the tileset and the result (in my opinion) became even better that the last update. So I decided to changed it.

Now the Grassland is declared complete. No more changes will be made on that environment. And it will apply the same to the rest of the current environments after their revamp.

There are three reasons for that decision: First, I keep changing the assets, so I better stop before you get annoyed by it. Second, every single update becomes more complicated to add more assets. And finally (and more important), this complete package have CC0 license, so the owners can create or modify their content as much as they want.

The dungeon environment is going well. The terrain is almost complete. Next are the details and background. Here is a pick:

Also, currently Multi Platformer Tileset have a sale for Itch Summer Sale. 15% off for a week, until 07/03/2017 midnight.

Various 2D side-scrolling environments on pixel art for your projects!